As part of the Unified Community Platform project, your wiki will be migrated to the new platform in the next few weeks. Read more here.

Conan Unconquered is a survival RTS game by Petroglyph Games, creators of Star Wars: Empire at War, Grey Goo and other games. It was released on May 29, 2019.

Set in the Conan the Barbarian universe, your city is under endless siege from the forces of Hyboria. You must gather and manage resources, build up your army, and research new technologies to survive wave after wave of assault from the savage hordes, and remain unconquered.

From the Star Wars: Empire at War and Command & Conquer veterans at Petroglyph comes the first-ever strategy game set in the barbaric world of Conan the Barbarian.

Conan Unconquered is a strategy game set in the barbaric world of Conan the Barbarian where you must build your stronghold and assemble an unconquerable army to survive the savage hordes of Hyboria. Wave after wave of increasingly more difficult enemies will rush at your gates and you will need to manage resources, research new technologies to advance your defenses, and recruit an ever-growing army if you are to save survive utter destruction.

You can choose to play the game entirely alone in single-player, but Conan Unconquered can also be enjoyed in full two-player co-op allowing for a truly unique, shared multiplayer experience. Players share a base, but both can freely construct new buildings and amass an army to reach their common goal.

Similar to games such as They Are Billions, the enemy hordes will keep coming at you and how long you can resist the invasion depends entirely on your ability to build your stronghold and lead your army. Gameplay is real-time, but you can also pause at any time to issue commands and start construction of new buildings. Battles will be bloody and savage with players having to deal with anything from fires raging through their stronghold to piles of corpses spreading death and disease.

The savage horde is at your gates. Will you fall or will you remain unconquered?

The following language are available with interface and subtitle support: 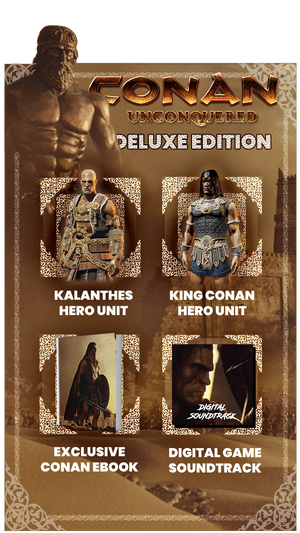 In addition to the base game:[3]

Scott Oden described it as "a 9000-word story called (aptly) "Conan Unconquered", set during the events of "Black Colossus" and incorporating REH's own Yaralet fragment."[5][6][7]

You will find the EBook and Soundtrack file here as well.

The Conan RTS career as seen on the Petroglyph site.